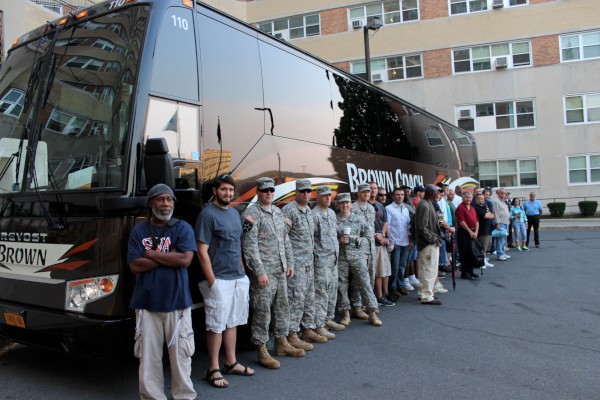 On Thursday August 22nd, Brown Coach provided the opportunity for 50 Veterans to go see a Yankees game free of charge. The trip included transportation, game tickets and a buffet.

Veterans boarded a bus at the Albany Stratton VAMC bright and early for the trip to see the Yankees play the Toronto Blue Jays. A generous donation from Brown Tours allowed for Veterans of various eras to come together for a fun filled day at the ballpark. Veterans spanning from the Vietnam War to the wars in Iraq and Afghanistan took part. The atmosphere of the trip was absolutely amazing. The Albany Housing Coalition joined in partnership, making a generous donation by providing a continental breakfast for the bus ride. From the outside, anyone would assume this group of people had been friends for years, when in fact, most of them had never seen one another before this day.

The three hour ride gave people time to get to know each other and by the time the bus pulled up in front of Yankees Stadium, people who had originally come on the trip alone, now had a friend to eat lunch and watch the game. A lunch buffet was provided for all at the Malibu Party Deck on the third level of Yankees Stadium. A few people on this trip were in uniform, attracting a lot of attention and kind words from strangers.

After the nice lunch, the group took their seats in the stadium where they cheered the Yankees on in unison, as a team in their own right. And, as if spending time watching an American Past Time favorite wasn’t good enough, the evening ended with a win for the Yankees.

Although everyone on that bus was exhausted, the bus was full of energy as they watched the movie “42” on the Brown Coach entertainment system. By the time this group of America’s Heroes arrived back at the Stratton VA, many of them were exchanging phone numbers and some even offering rides home to other Veterans who had used public transportation.

Overall, this was a great experience to so many Veterans. Not only an opportunity for the much desired camaraderie, but a well-deserved getaway.

KUDOS to Brown Coach for their partnership and continued dedication to our nations Veterans and Military as well as the Albany Housing Coalition and the NY Yankees. We look forward to a continued, longstanding friendship and partnership in service to those who served and continue to serve our country.